Local residents form the Malibu Agricultural Society to raise awareness about the health benefits of eating organic, locally grown foods and to help people grow their own.

By Paul Sisolak / Special to The Malibu Times

A new group committed to spreading its green-minded message about organic farming, environmental sustainability and, most importantly, that vegetables are good for you, has sprouted roots in Malibu. Its members call themselves the Malibu Agricultural Society, a collective of local residents vested in building and raising awareness to the health benefits of eating natural, locally grown foods, and  to the dangers of pesticides and chemicals found in mass-marketed produce. Formed late last year, the group, which has attracted more than three-dozen residents from all walks of life, recently marked its sixth month together. “A lot of the people in the group feel they have something special to offer each 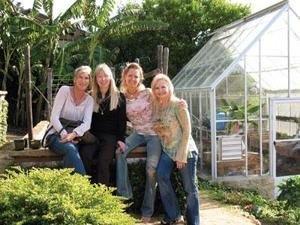 other, whether it’s gardening or sharing recipes,” member Kathryn Hagopian said. “It creates community in a really valuable way.”

That sense of community had been lacking, said June Louks and Mari Jennings, two of the society’s founding members, who decided to take action last year.

Louks had been experiencing severe headaches and other health issues the Malibu resident had linked to patterns in her diet. At first, she cautiously abandoned eating meat and adopted a raw foods regimen. But soon thereafter, Louks pulled out all the stops and began stocking the household kitchen with vegetables grown completely chemical-free. It led full steam to her planting a full, sprawling and functioning organic garden in the yard of the Louks residence, a verdant paradise of basil and tomato beds, banana trees and lush broccoli stems.

But Louks and Jennings realized that despite their zeal for organic fruits and veggies, and their mainstream popularity, there was nowhere for farmers, foodies and health enthusiasts to congregate in Malibu-a shame, they believed, considering Southern California’s perfect year-round climate for farming and gardening, and the longtime progressive sensibilities of Malibu’s residents.

In that sense, Jennings said, the ritual of pure, organic growing moves past being just a hobby for the society’s members, transcending a lifestyle choice for them.

“I think it’s the perfect time and the perfect place for something like this,” she said. “By really taking it seriously as agriculture, we’re providing for our families and our future, and our food supply.”

“It’s really hard to grow regular plants, let alone soils, without using pesticides,” Louks said. “Growing our own food is an audacious feat. It can be monstrous.”

The agricultural society, she added, “is really geared toward people who want to grow their own food with the thought that our food supply is sub-par.”

For Hagopian, who with her husband Stephan maintains one of the only certified biodynamic farms in Los Angeles County, her involvement in the group takes this concept to the next step.

“There’s a lot of science behind it,” she said.

Within the society’s monthly meetings, recipe swapping, potluck sharing and garden touring fall under an umbrella of something larger, more environmentally critical. Group discussions meander through a commonality of important environmental issues, and its members walk away enabled with a brighter knowledge that extends far beyond simple farming–permaculture and sustainable building, beekeeping, wild harvesting, collecting wild edibles, herbs, seed saving.

“We try not to be too dogmatic about anything,” Jennings said. “We’re more focused on specific skill building, like canning foods, graphing fruit trees, how to build composts; actually going to people’s farms and doing these hands-on activities. We’re interested in people doing it.”

In addition to strengthening the group’s own social relationships with people in Malibu, part of the ag society’s practical aim, Louks said, is relationship building with plants and herbs. Imbuing farming and growing practices that hearken back to California’s pioneer days is important to the group’s members because it reduces dependency on factory-farmed and pesticide-laden produce.

Part of the society’s mission statement reads, “To seek the homesteading skills lost to our parents’ generations, and put these basic survival skills back into our cultural heritage.”

It poses an important question, articulated by Monique Guild, one member of the group.

“Can I live off my yard and not have that dependency [on mass grown food]?” she asked.

And very much like the plants and seeds they delight in growing, the ag society’s membership has slowly increased, month by month. Through 2011, Jennings said she’d like to see the club experience more outreach and education. It’s not just organic food on the table, but a goal toward starting more student gardens in Malibu schools and larger, healthier options in local supermarkets.

“Outreach will just naturally grow out of building a culture that’s based on agriculture,” Jennings said. “I think if we have a community in Malibu that is strongly educated and practicing sustainable agriculture, it’ll just naturally overflow into other people’s lives.”

She continued, “I personally don’t want the Malibu Ag Society an activist group. I just want to empower people to grow their own food, bottom line.”

Jennings said the group enthusiastically welcomes new members with skills and experience to share, and to email malibuag@gmail.com for more information.